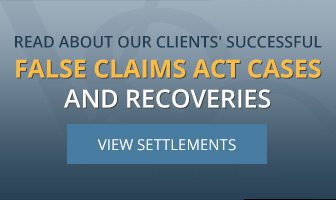 Professor Engstrom’s study found that of the 25 qui tam law firms across the country that have filed the greatest number of publicly reported False Claims Act lawsuits, VS&G’s qui tam lawyers had the highest success rate nationwide (65.9%) for achieving monetary awards on behalf of their whistleblower clients. VS&G also had the highest success rate (63%) for persuading the Department of Justice to join their whistleblower lawsuits.

The comprehensive study, published in the Columbia Law Review, analyzed the outcomes of over 4,000 qui tam cases pursued between 1986 and 2011 by qui tam lawyers representing whistleblowers under the False Claims Act.

If you are searching for a qui tam lawyer, you may want to read Professor Engstrom’s study.